Life Is Just A Game ! 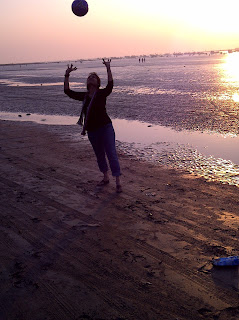 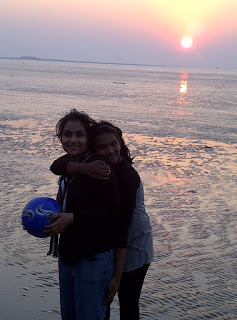 Life Is Just A Game!

I had no inkling what was in store for me that day, it however was going to make me feel alive and thrilled beyond compare.
It was a normal visit to a park, that too at the insistence and pressure from my ten year old daughter to take her to a new park in the neighborhood that evening, which her friends were talking about. Relenting ,that fine day my husband my daughter and I decided to visit the place that had constantly figured as the sole conversational word in my daughters vocabulary for the last few days .
The place turned out to be a massive jogger’s park with a nice jogging track. It had a neat lovely and well maintained garden in the center for people to stroll and relax in. There were a good number of people in it. Again at my daughters request we all decided to make full use of our visit by having a fast paced walking session with each other for company.
My daughter was happy and at the start itself she decided on a protruding stone near the starting point which was going to be our finishing point and that whoever reaches it first would be the undisputed winner. My usually occupied husband turned out to be sporting enough that day, so we soon began to enjoy ourselves like small children. And I wanted nothing more but to elicit peals of laughter from the dimpled face of my daughter and revel in it.
It was a truly enjoyable experience trying to beat my daughter at her own game; she would run a bit instead of walking and try to reach faster than us to the finishing stone.
Anyways time flew and soon we were done with about six laps of the huge track and were all warmed up nicely.
While walking around the track there was one sight which caught my eyes. It was of a few men playing volleyball at the net ,you see,the place also had a volleyball court on one side of the garden. So every time I would reach the bend I would keep checking them out. I used to be a player may be around twenty odd solar cycles back at school and college, but then lost touch with the game totally over the years.Oh! How I longed to be there playing my favorite game. A time there was in my life , that I would think nothing but of playing volleyball for the rest of my life, I had even toyed with the idea of going to play professionally a long time back….But well that’s another story! So coming back to where we were, I kept on watching the players practicing at the net hard. They seemed professional in their approach and boy were they tall! They were almost towering at the net. Their game was enjoyable to say the least, the spiking the defending and the strategies however I was itching to have a go at it.
So after walking we all settled at a spot near the court to watch their game. I enthusiastically told my daughter everything I knew about the game, the rules etc.as I was waxing eloquent on my favorite sport my husband who had silently noticing my enthusiasm for the game prodded me to go and ask them if I could play with them too. At first I was hesitant but my daughter also goaded as she had never seen me playing, and
I decided to have a go at it. I politely went up to the players with my request for some practice. They looked at me and at each other grinning probably as a woman requesting them for a some volleyball practice was a little way off their usual scheme of things.

Sure enough I was on and playing much to the delight of my daughter who watched me with new eyes. I too enjoyed my self and was so immersed in the game to notice the beetroot and brinjal color bruises my arms received from playing after such a long time... it hardly mattered, as I was having such an exhilarating time. My heart soared hearing my daughter cheer for me ,guess it pays for mothers to know some sport with which they could bond with their children, a role which has so typically been a males domain. The joy of sharing your knowledge and passion with your child is unparalleled.
Of course the fact that my partner had been encouraging  me to join and play, as without his insistence I probably would have just watched from the sidelines like we usually do and drove back home without connecting with the game. From that day on I regularly go to the park with my daughter much to her delight whenever possible.
My daughter is loving the game and insists on taking some practice from me,and by the way the players I practiced with did turn out to be professionals players of the railways team and they were in awe to know that though I hadn’t played for a very long time of over two decades and more, I had not lost touch with the game . They asked me to join them whenever I wanted to.
That day the unbridled contentment and thrill of playing and once again connecting with my favorite sport will stay with me for a long time indeed!
The best part of it all is that not only that nowadays I spend my evenings with my daughter doing what I thoroughly enjoy, I also see my daughter in a new light enjoying herself jogging at the track .And well I almost forgot to mention that we smile and laugh more often now. Life is after all just a game …..